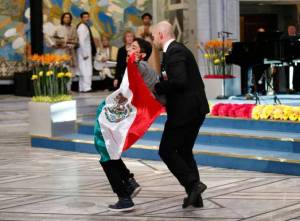 Last Wednesday, December 10th, a 21-year-old international relations student from Mexico’s National Autonomous University, Adán Cortés, stood up and approached the microphone at the Nobel Peace Prize ceremony with the Mexican flag in his hands. His request was a simple one: that the prize’s recipient, Malala Yousafzai, not forget what is happening in Mexico. With all due irony for a ceremony ostensibly celebrating world peace, Cortés was hustled forcibly from the room, fined a hefty sum for daring to interrupt the big show and is currently sitting in jail, awaiting expulsion from Norway. But his gesture has seared itself into national consciousness. It is Mexico’s version of the shot heard round the world.

As the world now knows, 43 teaching students from the Normal School in Ayotzinapa were disappeared on the night of September 26th, 2014. Only one of them – Alexander Mora Venancio – has been confirmed dead by an Argentine forensic team; the fate of the other 42 is still officially in doubt. Although thousands upon thousands have lost their lives since Mexico embarked on its ill-fated, US-backed drug war in 2007, the case of the 43 has galvanized public attention like none other, bringing together as it does all of the elements of the national nightmare: collusion at all levels of government with the drug cartels; a historical, reflexive and well-founded mistrust of the police; and a criminal investigative apparatus neatly melding buffoonish incompetence with outright malfeasance.

The official version of events runs this way: that the students, who were comandeering buses in order to attend the October 2nd ceremony commemorating the 1968 massacre of students at Tlatelolco, were rounded up by municipal police on orders of the mayor of the town of Iguala, José Luís Abarca. The police then handed over the students to members of the criminal organization Guerreros Unidos, with whom Abarca and his wife María were in cohoots, in order to be dispatched. This the cartel was to have done by burning the bodies beyond recognition in a local garbage dump while the army, cocooned in its garrison in the same town of Iguala, did nothing to intervene. (In a now-infamous declaration, Attorney General Jesús Murillo Kuram baldly stated it was a good thing the army didn’t intervene, “or it would have been worse”.) This is the federal government’s version of the “lone gunman” theory: it was one crazy mayor that done it, conveniently from the left-of-center PRD party. Nothing to do with us.

Mutliple sources have confirmed the swiss cheese-like consistency of this official version of events. First of all, according to the weekly newsmagazine Proceso and citing a report by a UC Berkeley investigative team, the Federal Police were involved in the operation from the get-go, monitoring the students along with state police as soon as the students left their school. There is certainly no lack of motive for the federales to have been involved: the rural normal schools, established in the aftermath of the Mexican Revolution to train teachers to work in rural communities, have long been a hotbed of radical social criticism. According to journalist Sanjuana Martínez writing in online news website Sinembargo.mx, there is a plan afoot to close the 17 rural normal schools that remain. And secondly, a report released this week by the National Autonomous University’s Institute of Physics concluded that it would have been impossible to burn 43 bodies to unidentifiable ashes in the garbage dump without the use of 33 tons of logs and 53 kilograms of gas per body, or if, as the story goes, the burning was done by tires, 995 would have been needed with a plume of smoke that would have been seen for kilometers around. Even the Argentine forensic team who identified the remains of Alexander Venancio carefully noted that their identification does not constitute proof that he was actually killed at the dump site.

Meanwhile, as La Jornada columnist Julio Hernández López notes with typical astuteness, the Peña Nieto administration is attempting to “dosify” the tragedy by releasing news a little bit at a time, essentially running out the clock on the story in the hopes that the public will lose interest over time. It is, needless to say, a strategy that has been used effectively enough in the past. But that, as the story unfolds, may actually be giving the government too much credit, presuming that it is interested in releasing information at all rather than stonewalling its own complicity in the case. Given the collusion of the judicial and executive branches in Mexico, given the absence of an independent investigative apparatus, it is hard to imagine Peña Nieto’s government moving forward with anything approaching a real investigation without international pressure added to domestic protest. And that is why it is so important that Adán Cortés did what he did at the Nobel Peace Prize ceremony: keeping the story of the 43 front and center in international attention, foiling any attempts at dosification and keeping the pressure on an administration already being rocked by a conflict of interest scandal involving favors provided by the Grupo Higa construction group to first lady Angélica Rivera and Finance Minister Luis Videgaray.  The story of Ayotzinapa is one that cannot and must not be forgotten. And by reminding us of that, Adán Cortés deserves all of our commendation. Norway, take notice.

*UPDATE Monday, December 15: Adán Cortés has been officially expelled from Norway and is due back to Mexico this evening.

One thought on ““Please Malala, Don’t Forget About Mexico””