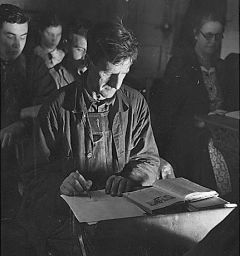 My epiphany, when it came, did not take place at an araby but in the more prosaic confines of a college townhouse. I was 21, a senior, and in my final semester when, one day at the dining room table I realized that, in a few short months, I could be free of classrooms for the first time in my conscious life. Since the age of four when I started kindergarten, and even before if Mrs. McGovern’s nursery school was thrown into the mix, my life had been molded and mandated, dominated and dictated by obligatory schooling. A hundred-and-eighty school days a year at six hours a day multipled by twelve years made for roughly 13,000 hours in my K-12 education alone; top that off with another 1,500 or so college hours and I was up to 14,500. Fourteen thousand, five hundred hours of my one-time-only youth. And that wasn’t even counting early band rehearsals, homework, detentions, and the mind-numbing quantity of extra-curricular activities American students submit ourselves to in order to pad out our college transcripts. Sitting at the table, I began running through what those 14,500 hours had provided me with in terms of an education. The conclusion was inescapable: not enough to justify the time and expense. Not by a long shot. This was neither the most efficient, nor the most empowering, nor the most emotionally-healthy way to go about the process of learning. By the end of the semester, I had turned my back on graduate school, gotten a job in a library and was at work on a first attempt at a novel. My life as a citizen-at-large had begun.

And I am happy to report that, although my formal education ended at the door of a mere BA, I have not only continued to be able to learn, I have done it better. An example: in six school years, from grades seven to twelve, plus a particularly useless college conversation course, I learned precisely one foreign language (and it is a sad statement on our educational affairs that I was about the only one that did even that). In the years since leaving school, I have learned four more, including the one that is now my literary language. I have done this, in the main, without classrooms of any kind. This is not intended to be a boast; apparently I am “gifted” at language learning. But isn’t that, or shouldn’t that be, the goal of education – to both discover and foster the talents of each learner with all the means at our disposal? And even with my “gift” (which I think is often a lazy way to describe a combination of interest and discipline), I have struggled and scraped over many years to get my Spanish to the point of being able to express myself fully in it in writing. What if I had been exposed to languages at an early age, when we are most open to them? What if I hadn’t been placed for a grand total of 14,500 hours in a series of institutions that devote themselves to wringing the joy of learning out of us? Instead of being taught by their parents and private teachers, one shudders at the thought of a Beethoven or a Brahms being sent to one of our school music classes where, in third or fourth grade, they might first get to blow into a plastic recorder. Thus do we fancy ourselves, in the twenty-first century, more educated than our unfortunate forbearers.

“The American university has become the final stage of the most all encompassing initiation rite the world has ever known,” Ivan Illich once wrote in Deschooling Society. “No society in history has been able to survive without ritual or myth, but ours is the first which has needed such a dull, protracted, destructive, and expensive initiation into its myth.” To Illich, a proper educational system should do three things: “it should provide all who want to learn with access to available resources at any time in their lives; empower all who want to share what they know to find those who want to learn it from them; and, finally, furnish all who want to present an issue to the public with the opportunity to make their challenge known.”

3 thoughts on “On Learning”